After Each Losing a Father to Brain Cancer, Chicago Couple Vows to Help Find a Cure 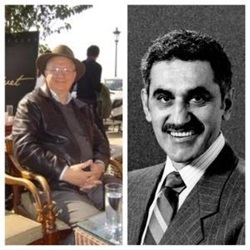 
﻿CHICAGO, IL –  One day in 2009, Maria Nijim’s father got behind the wheel of his car and realized he couldn’t see out of one eye. An MRI showed a tumor and then surgery confirmed a devastating diagnosis – glioblastoma – the most aggressive type of brain tumor. While Maria and her family digested the news, Maria’s husband, Faris Nijim’s, heart sank. He lost his father to the same disease more than 20 years earlier.

“I thought here we go again, lightning is striking twice,” said Faris Nijim. “Maria’s family was reeling but I knew we had to get her father to the Northwestern Medicine Brain Tumor Institute for the best treatment and for the most compassionate care available.”

That’s what they did. And while Maria lost her father to brain cancer in 2010 the desire to cure this disease lives on in the Nijims who are the co-chairs of the 2015 Minds Matter gala to raise money for the Northwestern Brain Tumor Institute* (NBTI). This year, the gala will take place the first day of National Brain Tumor Awareness Month on May 1, 2015 at 6 p.m., at the Hilton Chicago, 720 S. Michigan Ave., Chicago.  Since 2009, Minds Matter has raised more than $3 million for the research and treatment of brain and spinal cord tumors at the Northwester Medicine Brain Tumor Institute.

“Minds Matter is more than a fundraiser, it’s grown to be a celebration of survivorship, advancement of groundbreaking brain tumor research, and of improving treatment outcomes and quality of life for patients,”  said NBTI co-director Jeffrey Raizer, MD, director of medical neuro-oncology at Northwestern Memorial Hospital and the Lurie Cancer Center, and professor of neurology and hematology/oncology at Northwestern University Feinberg School of Medicine. “It’s a time to honor our patients and their families, as well as our dedicated team of scientists, physicians, surgeons, researchers, nurses, and social workers. For many patients and families supporting a cause that’s close to their hearts like Minds Matter is part of the healing process.”

Proceeds from the dinner will benefit research and programs at NBTI, a nationally recognized leader in the fight against brain and spinal tumors. The NBTI, a collaboration between Northwestern Medicine® and the Lurie Cancer Center, is dedicated to advancing brain and spinal cord tumor research and improving treatment, outcomes and quality of life for patients. Northwestern Medicine’s neurology and neurosurgery programs have earned national acclaim, ranking 10th in the nation and first in Illinois on the 2014 U.S. News & World Report’s annual Best Hospitals list. Northwestern Brain Tumor Institute serves and treats approximately 7,000 brain and spinal cord tumor patients each year.

“Support for this event will hopefully move the needle, to extend the length and quality of life for brain and spinal tumor patients said NBTI co-director James P. Chandler, MD, surgical director of neuro-oncology at Northwestern Medicine Memorial Hospital and Lavin/Fates Professor of neurological surgery at the Feinberg School. “We deliver state of the art surgical care and thanks to Minds Matter, we’re able to provide resources for patients and their families to help meet the daily challenges of living with a tumor.”

Guests will have the opportunity to bid for live auction items, including a trip to the 2015 American Music Awards Show in Los Angeles and a “Top Gun Experience” which includes a fighter pilot mission for two people. The night will also feature music by The Gold Coast All-Stars.

To purchase tickets or learn more about sponsorships, visit The Northwestern Brain Tumor Institute (NBTI) or contact Jacqueline Evans at 312.926.4199 or jevans3@nm.org.