Battling Back to Her Babies

January 19, 2015 was a lot of things for Kathleen. It was her 35th birthday. It was the day she gave birth to twins, Shea and Sean, her "miracle babies,” at Northwestern Medicine Prentice Women’s Hospital after years of intense fertility treatments. And it was the day before she learned she had stage 2 breast cancer. January 19th was her highest of highs, before life felt like it was falling apart.

Kathleen had always been very diligent about breast self-exams and getting mammograms – her mother passed away from breast cancer in 1989, so she began getting mammograms at an early age. She had one right before she got pregnant – nothing out of the ordinary. Still, about a month before she gave birth, she felt a lump in her right breast. First, she thought it was just a natural part of her pregnancy, perhaps her milk coming in. But after she delivered her twins in the hospital, she asked her obstetrician, Elias R. Sabbagha, MD, about the lump and while he thought it might just be a cyst, he wanted her to get checked.

“I had grown very close to Dr. Sabbagha during our fertility treatments and to this day, I give him props for being so proactive with getting me tested right away,” said Kathleen. “He really did save my life.”

After her mammogram, Kathleen had an ultrasound, at which point she was told a biopsy would be needed– and that it very much looked like breast cancer. Kathleen couldn’t believe it – she remembers laughing, telling her inpatient care team no, no – she had just had twins, it was probably just milk ducts or a cyst. But her care team was solemn and everything moved very quickly after that.

The biopsy came back positive. Kathleen was discharged home with two new beautiful babies and a diagnosis of breast cancer. Shortly after, Kathleen went through a range of tests – MRIs, blood tests, bone scans and so on – and started receiving referrals for oncologists and surgeons throughout the city.

“We had gotten such good care during everything we had gone through up to that date that we decided to go with Northwestern Medicine,” Kathleen explained. Her care team at the Robert H. Lurie Comprehensive Cancer Center of Northwestern University at Northwestern Memorial Hospital would be led by oncologist Sarika Jain, MD. 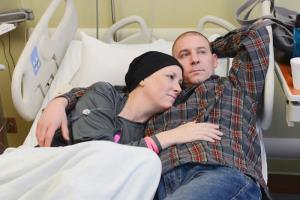 Meanwhile, Kathleen had new babies at home, too. Her friends and family immediately jumped into action. She remembers her girlfriends showing up en masse the day when she first got home from the hospital after giving birth. They were equipped with a plan to support her and her family in every way while, Kathleen prepped to meet her care team at Northwestern Memorial Hospital and discovered what they had in mind to take on her cancer.

“They had assembled a team and it wasn’t just one doctor, it was an entire team of doctors, that were looking at my background and my situation and asking, what are we going to do to keep this woman around and let her see her kids grow up?” said Kathleen.

Kathleen’s breast cancer was very aggressive and it was growing fast. She learned she had the BRCA gene and she was HER2-positive. The former was a shock – Kathleen’s sister was told almost a decade earlier that Kathleen herself wouldn’t need to be tested since her sister tested negative at another hospital – and the latter, while a scary diagnosis a few years ago, now allowed her care team to craft a precise treatment plan thanks to better medicine.

“I was literally just sobbing through these meetings with the doctors and they would hold my hand and grab me tissue,” Kathleen remembered. “The bedside manner was just incredible; I can’t even explain the care we received – even outside the medical care. 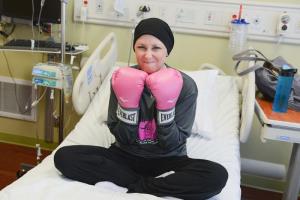 “You get to know these people really well, but they really remember the little things. They help you get through it obviously in a medical capacity but they also just really do care that you’re getting the best care and you’re feeling okay,” Kathleen continued. “I had a lot of setbacks and always got a phone call from my doctor making sure that I was doing okay. Any time someone’s like, do you think I should go Northwestern Medicine or this other hospital – I’m like, it’s not even a question. You’re going to get the top care, in my opinion, there.”

Ultimately, Kathleen would receive six cycles of aggressive chemotherapy to shrink and control her tumor, starting just a month after she gave birth including a full year of Herceptin therapy. She experienced the worst of the side effects – every low percentage risk of infection or allergic reaction. She was in and out of the hospital for three-day visits throughout her treatment. When her chemo finished in May of 2015, she had a double mastectomy in July.

“I had a lot of mixed emotions about it. As a woman, you have already gone through losing your hair – as much as you say it’s just hair, it’s a difficult thing. It’s pretty hard to get weird looks from people when you’re out with these little babies and you’re wearing a chemo cap,” Kathleen remembered. “But for the double mastectomy, I was ready. I knew that this was the final step to officially rid my body of the cancer.”

She opted to do tissue expanders and then the exchange surgery for implants, nipple reconstruction and 3D tattoos after that. “They look so real,” Kathleen laughed, almost a year later. “It’s really, really weird, but they really make you feel like normal.”

Still, as she shifts into a survivorship mode – check-ups every few months, fundraising and raising awareness for BRCA gene testing – she’s discovering a new normal.

“Kathleen’s exceptional struggle as both a cancer patient as well as a new mother of twins really touched me on a personal level. Her courage, strength, and grace in such challenging times continue to inspire me in my daily practice.” Dr. Jain said.

“It’s about enjoying your life and being thankful for it but also picking yourself up and moving on. I can’t focus on what I didn’t get to do because there’s nothing I can do to change it,” Kathleen explained. “I think it’s just that I don’t take a second for granted with my kids. I want to play with them and cuddle with them and take them on walks and do anything I can that we didn’t get to do last year.”

“They’re funny and loving and just running in every direction. Seeing life through their eyes and experiencing everything – like trying a bite of apple pie – with them is so cool,” Kathleen continued. “It’s just so amazing and it really puts a whole new spin on life.

END_OF_DOCUMENT_TOKEN_TO_BE_REPLACED

When his friend’s heart stops beating, a Northwestern Medicine employee springs into action to save his life.

END_OF_DOCUMENT_TOKEN_TO_BE_REPLACED

Giving is in Cory Cleggett’s blood.