Getting a Second Opinion: Nathan’s Proton Therapy for Brain Cancer

A year after having surgery to remove a massive brain tumor, Nathan Darko’s symptoms returned. After a second brain surgery, Nathan was told he needed radiation therapy. That’s when his parents found out about proton therapy at Northwestern Medicine Proton Center -- a treatment option that changed Nathan’s life.

Year One: The First Tumor

His first tumor was discovered when Nathan was a senior in high school. He was healthy and active in cheerleading and baseball. A few months into his senior year, Nathan experienced the worst headache of his life. It became more and more persistent in time, until the pressure was unbearable and caused him to throw up.

Nathan was diagnosed with central neurocytoma, a rare type of a brain tumor located in the center of the brain.

Right after Thanksgiving, Nathan underwent a 7-1/2-hour surgery at a hospital in central Illinois to remove the tumor. Due to the massive size and location of the tumor, the surgery was more complicated than expected. He lost a liter of blood, and he couldn’t use the left side of his body. He spent the next several months working with rehabilitation specialists to learn how to read and write again as well as to build his strength for walking and using his hands. They also addressed cognitive issues, short-term memory problems and a change in his emotions.

Despite missing 50 days of school, Nathan recovered from the post-surgery complications in time to play on the baseball team and graduate on time with his high school classmates. He even made the collegiate cheer team at Illinois State University (ISU), where he started his freshman year that fall. But, a few weeks after moving into the dorm at ISU, his symptoms returned.

“As an athlete, I’ve always been very aware of my body, so I knew something wasn’t right,” he explains. He had an MRI and met with his physician in his hometown, where he was told the tumor was back and growing in multiple pieces.

Some of the tumor was removed during a second, much shorter surgery in December. But after a few weeks of monitoring, Nathan’s physician determined the tumor was still there and suggested radiation therapy. Nathan’s parents started to research every option, and decided to look into proton therapy.

Because he was a St. Jude patient, Nathan first went to a proton center in a different state. After making the trip and taking a tour of the facility, his parents were told insurance wouldn’t cover the out-of-state hospital costs. This setback led Nathan and his parents to Northwestern Medicine Proton Center, the first and only proton therapy center in Illinois.

During his initial visit to Northwestern Medicine Proton Center, Nathan immediately felt at ease with the comfortable environment and friendly staff. He met with the Dosimetry team who created his customized treatment plan and a radiation therapist to be sized for the treatment mask. He also received a one-on-one consultation with William F. Hartsell, MD, FACR, FACRO, medical director, Northwestern Medicine Proton Center.

Because of the size and type of tumor, proton therapy would target the tumor’s multiple pieces by using a precise dose of radiation that conforms to the shape of the tumor. Only the spots in his brain with cancer would receive the radiation through pencil beam scanning, which minimized the damage to surrounding healthy tissue.

Central neurocytoma tumors are difficult to treat. “The difficulty is treating any brain tumor with radiation, primarily because it may cause problems with memory, thinking (IQ), as well as effects on other things like the pituitary gland,” Dr. Hartsell explains. “The location of Nathan’s tumor, and his young age made him a good candidate for proton therapy treatment.”

Right before he started proton therapy, Nathan tore his meniscus, requiring him to walk with crutches. Fortunately, Nathan was able to receive care for his knee at Northwestern Medicine Orthopaedics.

With his orthopaedic care in place, Nathan started his daily proton therapy treatments in March. He and his parents lived in their home away from home in a nearby hotel for seven weeks. He had 33 rounds of treatment and finished his treatment in April 2014.

The Future Is Bright Again

In December 2016, Nathan received the news of a lifetime: He was tumor-free.

“We were in complete shock when we received the news. Proton therapy is remarkable. It completely disintegrated my tumor,” Nathan says.

Nathan reapplied to ISU and decided to change his major to education because he wanted to make a bigger difference in people’s lives. He has since graduated from college, bought his first house and landed a job teaching health and physical education, and coaching at a middle school in central Illinois. He also volunteers as a patient advocate for the Northwestern Medicine Proton Center where he mentors other patients, and shares his experience and support with people who are considering proton therapy.

“I would go back to Northwestern Medicine in a heartbeat just knowing the type of people who are there and what they can offer,” Nathan says. “When I share my cancer journey with my students, they seem to try harder and appreciate things more. I tell them, you don’t know what you can or can’t do, until you can’t do it anymore.” 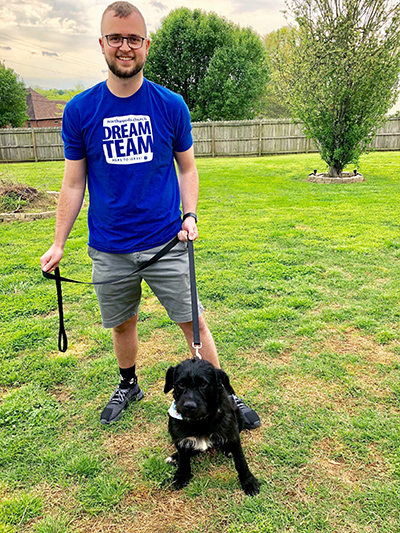