Lights in the Darkness

Her smile glows bright on the lighthouse on which she’s depicted.

Considering that Patricia “Pat” Ward has become a beacon to others, it’s quite fitting that she is featured in the public art display The Lighthouses on the Mag Mile, which celebrates access and inclusion for people with disabilities.

They really did light my path.

Pat, who has been visually impaired for four decades, finds something magical and serendipitous about her journey.

In 2017, Pat received news that she had a pituitary adenoma, a slow-growing tumor in the pituitary gland at the base of the brain. The MRI also revealed the tumor was putting pressure on her optic nerve.

“I suspected her vision loss was due to the tumor. When I told her, she said she’s lived a good life blind and had no regrets. When I presented our options, she said she’d like to remove the tumor,” says Northwestern Medical Group Neurosurgeon James Chandler, MD, vice chair for clinical affairs, Department of Neurological Surgery and Co-Director of the Lou and Jean Malnati Brain Tumor Institute of Robert H. Lurie Comprehensive Cancer Center of Northwestern University at Northwestern Memorial Hospital.

With no promises that her vision would return, Pat took the chance for “a chance to see sunlight” once again. Dr. Chandler then proceeded to remove the tumor from the pea-sized organ, located behind the nose. Immediately after, she had regained some vision and, after several years of being blind, could see shadows once again. “I think it’s a remarkable testament about her character. It’s also an important message for others who are experiencing blindness to get a second opinion, as pituitary tumors can cause blindness," says Dr. Chandler.

In turn, Pat credits Dr. Chandler with saving her life. “I’m glad he was there when I needed him,” she says. “I was grateful for him and that I’m okay.”

Six months after recovering from the successful operation, Pat would once again turn to Dr. Chandler. She experienced back pain after walking several blocks, a hallmark of spinal stenosis, which is a narrowing of the spine that puts painful pressure on the spinal cord. In January 2018, Dr. Chandler performed surgery to address that issue as well.

“She is a remarkable lady with an enormously positive and inspiring disposition,” says Dr. Chandler.

After her operation, Pat underwent physical therapy where her guide dog, Carson, was encouraged to participate and be a part of Pat's daily therapy routine.

Pat admits that therapy was a slow process, but she is grateful for the care she received. “For a long time, I couldn’t walk, and didn’t think I’d be better. But I am. It’s like a night and day difference,” Pat says. “Without all the help of Northwestern Medicine and Shirley Ryan AbilityLab, I wouldn’t be here. Each part plays a role, and I’m lucky to be in Chicago and take advantage of this level of care.”

Lighting the Way for Others

Now, Pat is lighting the way for others.

She was asked by her neighbor, artist Jim Carroll, to pose for him for Lighthouses on the Mag Mile. The project is sponsored by The Chicago Lighthouse, an organization that assists the visually impaired, disabled and veteran communities with vision care and support services. Jim had witnessed how Pat learned to walk again in the halls of their residential building after her surgery.

Pat is grateful to all the people who helped her on the journey to where she is today. "I want people to know how many places there are to go for help," she says. "It happened in waves. Dr. Chandler kept me alive, then made it so I can stand. Carson helps me every day. It's more serendipity than anything. They were all there when I needed them."

Pat continues to provide guidance to others as they navigate their loss of vision. To her, the lighthouse is particularly symbolic.

“They really did light my path,” she says.

END_OF_DOCUMENT_TOKEN_TO_BE_REPLACED 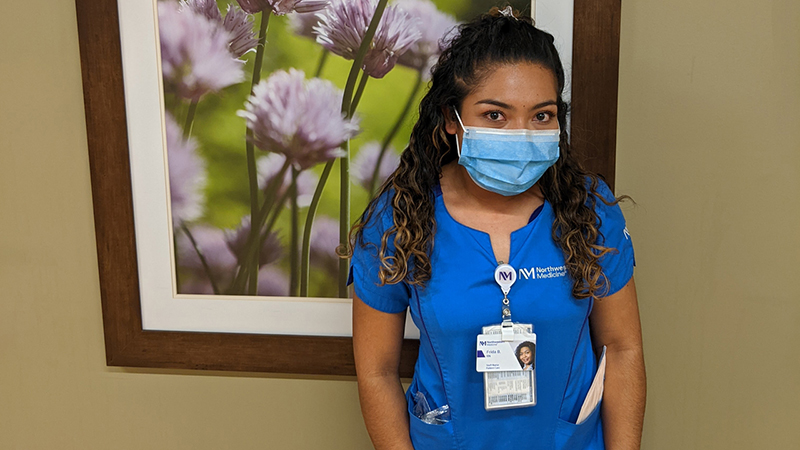