What Is Robotic Surgery?

What Is Robotic Surgery? 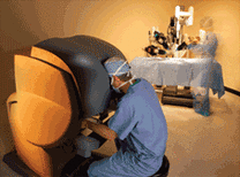 Northwestern Medicine surgeons are dedicated to offering less invasive alternatives to traditional procedures for our patients. Robotic surgery provides a number of benefits for patients including:

Northwestern Medicine surgeons make use of the innovative da Vinci® Surgical System to help provide the precision needed for a variety of complex procedures, including surgery for many cancers, urologic surgery, cardiovascular surgery, thoracic surgery, gynecologic surgery, and general surgeries.

How the system works

The da Vinci® Surgical System works in much the same way as a traditional laparoscopic procedure. Surgeons make small incisions, and a camera lens with a light source and instruments are inserted into your body through small tubes. However, instead of directly manipulating the laparoscopic instruments, surgeons sit at a nearby console and view a magnified three-dimensional image of the surgical site.

Laparoscopic surgery, also known as minimally invasive surgery, allows surgery to be performed without making long incisions in the body. Instead, surgeons make several small incisions, typically under an inch in length.

A thin, lighted tube with a camera at the tip, called a laparoscope, is inserted into one of the openings. The camera allows surgeons to view the desired surgical site on a large, flat-screen monitor. Tiny surgical instruments are inserted through the remaining incisions, which physicians manipulate to perform delicate procedures. In orthopaedics, this type of surgery is called arthroscopy.

With ongoing advancements in surgical technology and the exceptional skill of our surgeons many areas of surgery can now be performed laparoscopically, including:

Smaller incisions mean that less skin, muscle and other tissue are cut during your surgery, so you heal faster and the risk for complications is reduced. Typically, laparoscopic patients leave the hospital one to three days sooner than those who have traditional open surgery. Many laparoscopic surgeries can be performed on an outpatient basis, allowing you to return home the very same day.